October 02, 2017
We saw a lot of new exciting features for Azure being announced in the recently concluded MSIgnite conference. Many of the long anticipated features or products were released in preview and in this blog series I will try to explore some of these features and how you can get started with them.

This can be considered as an extension to the Storage import/export services already available in GA in Azure. While using the Import/export service, customers have to copy their data to HDDs of a given specification and then send them off to Azure datacenters, where the data will be moved to your storage of choice . This services targets migration scenarios where customer have to transfer several terabytes of data to Azure storage and over the network transfer would take  a very long time or is practically impossible.More details about this service can be found here : https://docs.microsoft.com/en-us/azure/storage/common/storage-import-export-service
With Azure Data box we move one step ahead, where you can order an Azure Data box to copy and transfer your data to Azure. It is described as a 'secure,tamper-resistant' option of transferring your data to Azure cloud. It uses a plug and play model supporting NAS protocols such as CIFS & SMB and data is encrypted using 256 bit AES encryption. The services is available in preview and you can signup for the same from the Azure portal.As shown below, you need to provide some details such as Azure Subscription, Azure of data to be transferred and , targeted Azure region and service, data transfer time frame and frequency. 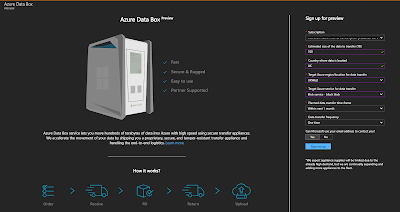 Azure platform has  DDOS protection built in at platform level.This protects against platform level DDOS attacks and is now being named as Azure DDOS protection basic.This isolates any resources being attacked when a predefined  threshold is reached. However this service is platform managed and controlled. DDOS standard is a new offering in preview that helps integrate DDOS at Virtual network level. Services that have public IPs associated with it like VMs, load balancer ,application gateways and service fabric instances are protected against DDOS attack . DDOS standard provides protection against volumetric attacks and protocol attacks (layer 3 and layer 4) . When used with Application gateway WAF it also provides protection against layer 7 attacks like HTTP protocol violations,SQL injection and cross-site scripting . The service can defend and protect against 60 types of DDOS attacks . DDOS protection standard is integrated with Azure monitor and provides visibility of the metrics. Alerts about any kind of attacks happening in your environment can be generated using Azure Metrics, OMS integration etc. The service offers turnkey protection and can be used for always on traffic monitoring. More details about the service is available from this document : https://docs.microsoft.com/en-us/azure/virtual-network/ddos-protection-overview . You can sign up for the preview from this link :http://aka.ms/ddosprotection

Popular posts from this blog

Windows server 2012: where is my start button??

November 20, 2013
If you have been using Windows Server OS for a while, the one thing that will strike you most when you login to a Windows server 2012 is that there is no start button!!.. What??..How am I going to manage it?? Microsoft feels that you really dont need a start button, since you can do almost everything from your server  manager or even remotely from your desktop. After all the initial configurations are done, you could also do away with the GUI and go back to server core option.(In server 2012, there is an option to add and remove GUI). So does that mean, you need to learn to live without a start button. Actually no, the start button is very much there .Lets start looking for it. Option 1: There is "charms" bar on the side of your deskop, where you will find a "start" option. You can use the "Windows +C" shortcut to pop out the charms bar Option 2: There is a hidden "start area"in  the bottom left corner of your desktop
3 comments
Read more

Use Diskpart to make drives online

May 21, 2013
Issue: In disk management, disk is shown as missing or Offline in Windows Resolution: The disks can be made online by using diskpart utility - Open a command prompt->type diskpart -Inorder to list the disks in the system type: list disk -Note down the number of the disk that you want to make online -Select that disk to operate upon, For eg:, if the disk number is 1, type: Select disk 1 -Now that particular disk will be selected as teh active disk. If you type "list disk" command once more, you can see a * symbol on the left side of the selected disk -Inorder to make the selected disk online type : online disk - If the disk is made online, you will get a message that the operation is completed successfully
1 comment
Read more

December 07, 2018
Once you have decided to run your workloads in AKS service in Azure, there are certain best practices to be followed during design and implementation. In this blog we will discuss two of these recommended practices and the practical aspects of their implementation- Azure AD integration and name space isolation While AAD helps to authenticate users to your AKS cluster using the existing users and groups in your Azure AD, name space isolation provides logical isolation of resources used by them. It is useful in multi tenant scenarios where the same cluster is being used by different teams/departments to run their workloads. It is also useful in running say a dev, test and QA environment for organization in the same cluster. Combining AAD integration with name spaces allow users to login to their namespace using their Azure AD credentials AAD integration with AKS : The following Microsoft document will get you started  with AAD integration of AKS cluster.: https://docs.microsof
3 comments
Read more

shijisujai
An IT professional with close to 15 years of experience. I started with Datacenter management, moved on to virtualization technologies and now cloud computing. Currently, I am working as Technical Delivery Manager in Microsoft. I lead a team of consultants who work on cutting edge cloud technologies and deliver digital transformation projects . I enjoy sharing my experiences in my blog, but the opinions expressed in this blog are my own and does not represent those of people, institutions or organizations that I may be associated with in professional or personal capacity, unless explicitly stated.